Another day on the street. We started at the markets which are close to our hotel.

There are refrigerated stalls in these hanger like buildings, they are vast and took our breath away when we entered the first one which was the meat pavilion. 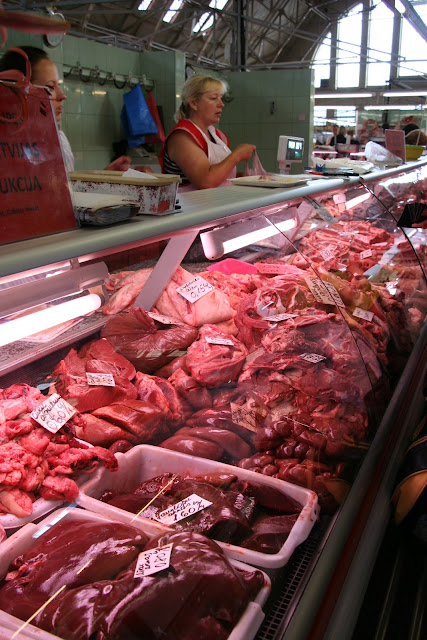 There are hundred of stalls in this area alone all selling meat, I only saw women manning them and doing all the butchering as well.
This stall was all smoked meats. 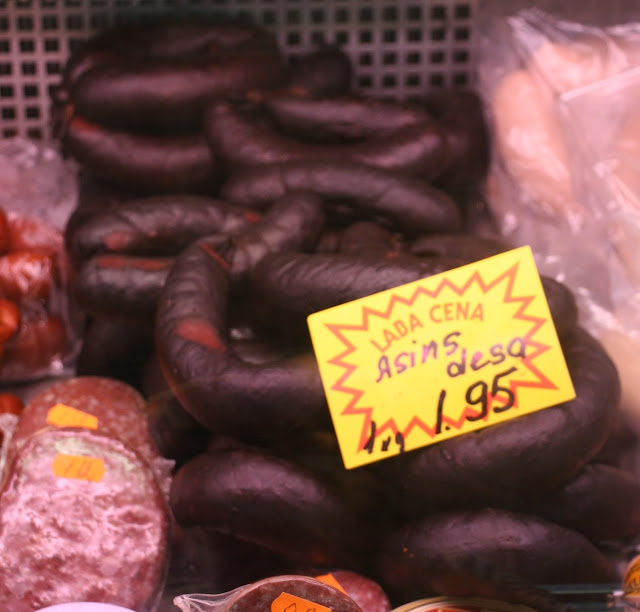 Don't ask me what this is, could have been black pudding sausage. 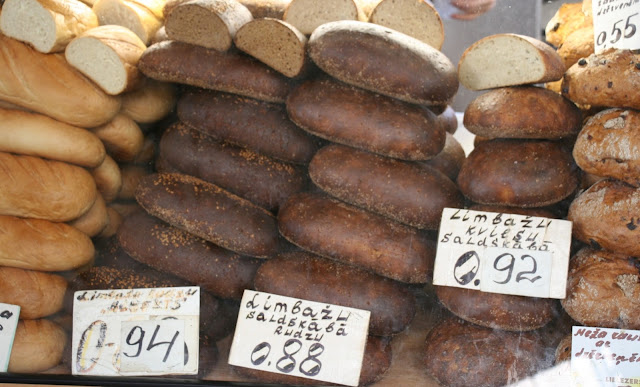 There were bread stalls, cheese stalls, herbs, chicken and fresh and dried and smoked fish. 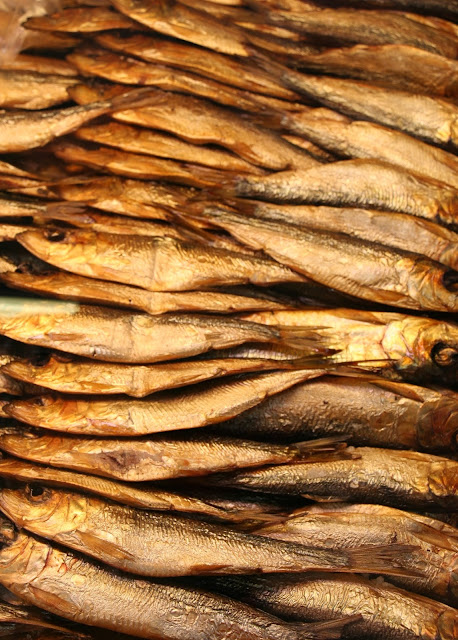 Think these are sardines 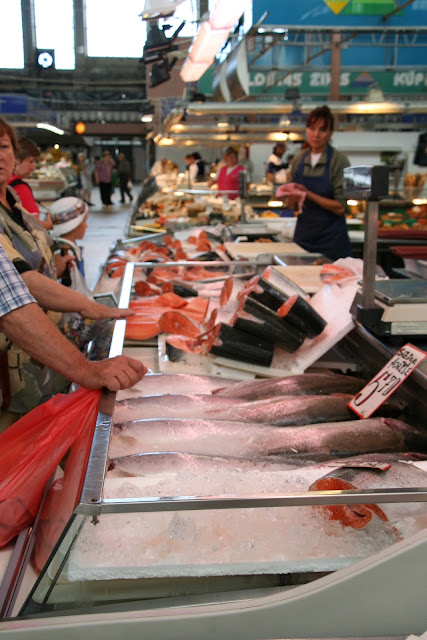 Fresh fish, large whole salmon in front and cut pieces behind
Outside the huge pavilions were acres of other stalls with fruit and vegetables, clothes, shoes, reading glasses, knitted goods, you name it, it was being sold there. 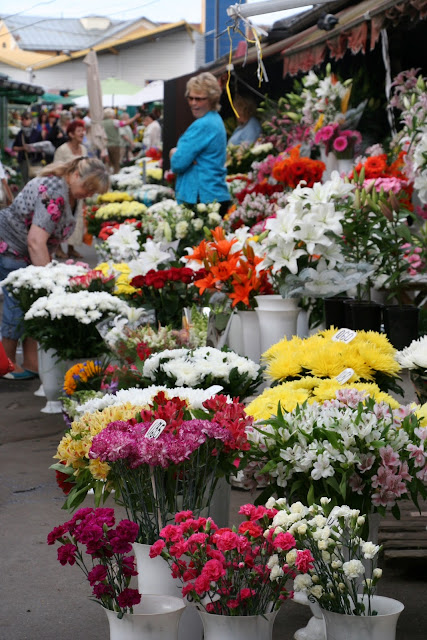 Hundred of flower stalls, and seedlings, hanging baskets. They were so cheap as well. A punnet of marigolds containing 6 seedling was about 20c Au. 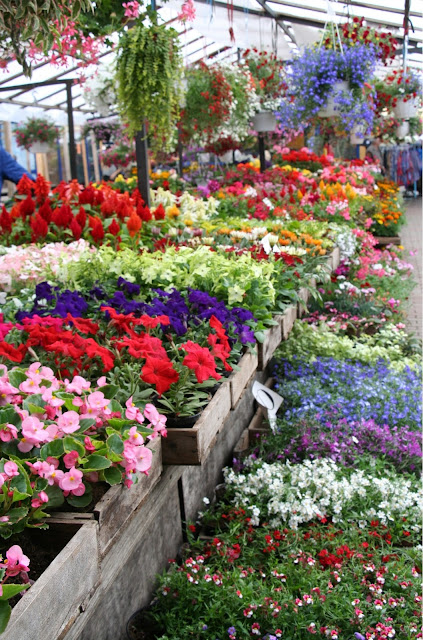 The fruit was astounding, market after market. 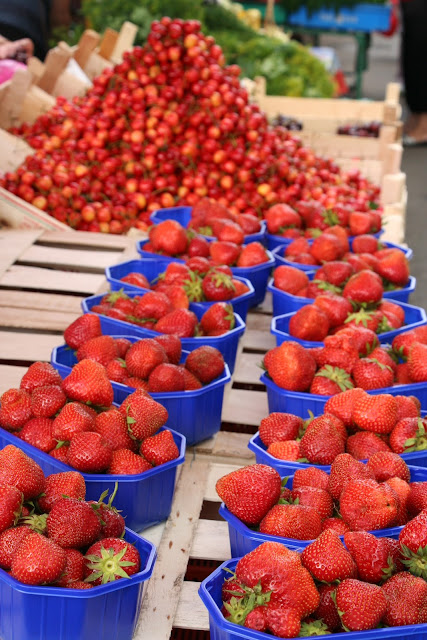 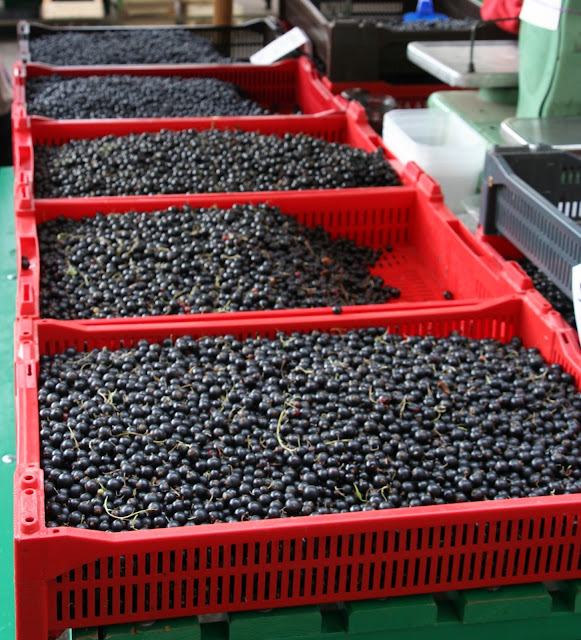 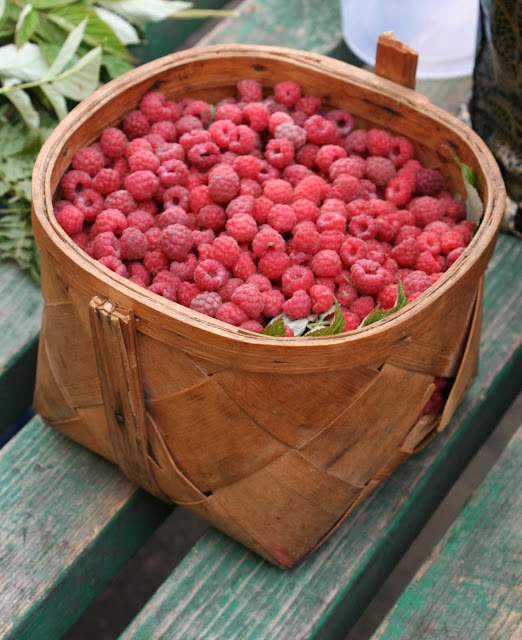 Yes Kate, there was even a wooden spoon stall, so inexpensive,I just couldn't walk past could I? 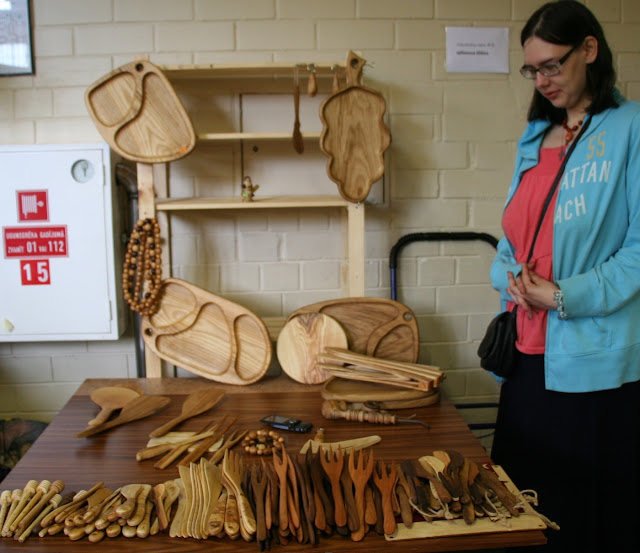 The girl was very nice and I bought a large spoon carved out of Aspen.
After being totally overwhelmed by the size of the market and the beautiful food, we staggered off towards the Art Nouveau area way over on he other side of town. I was tired as I didn't sleep well so we stopped for a coffee (only), and sat for ages too tired to move, it was opposite the Swedish Embassy. We felt we had some claim to it!!!  A large group of Russian business men in their slick suits came into the restaurant, it was one of the many restaurants outside on the footpath in summer. I had to smile when they all got out their iPhones and tapped away and drank their coca-colas. At times I think I'm in a spy movie. There are 40% of Russians living in the city of Riga, most wait staff can speak several languages which makes me feel quite ashamed of myself as they switch from language to language.
We found the Art Nouveau Museum finally and were not expecting much after previous disappointments with museums but were completely taken by surprise. The ground floor of the house was the museum and has been arrange as if it was around 1910. Absolutely beautiful. 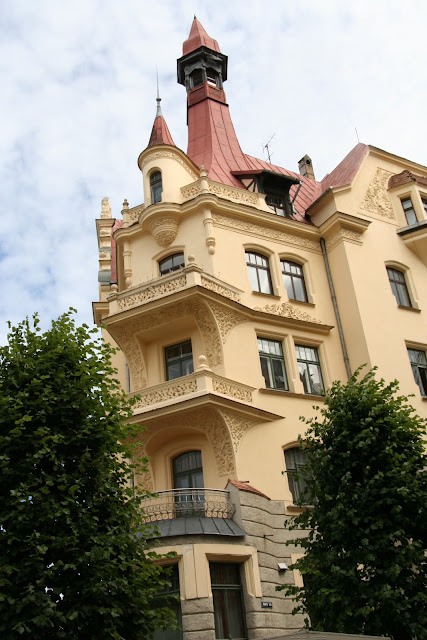 This is the house where the museum is located. 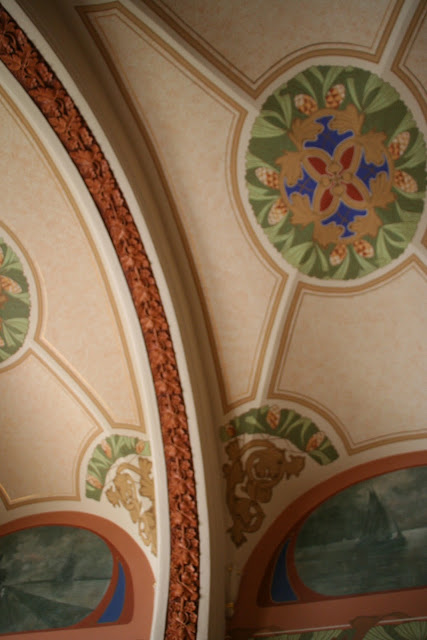 The entrance ceiling, sorry its a bit blurry but it was dark. 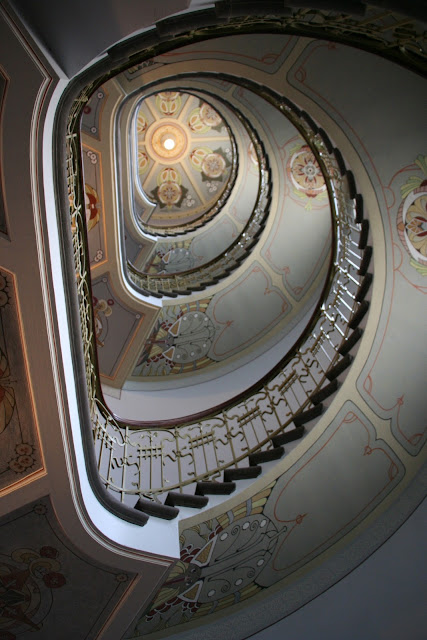 Looking up the stair well at the entrance. 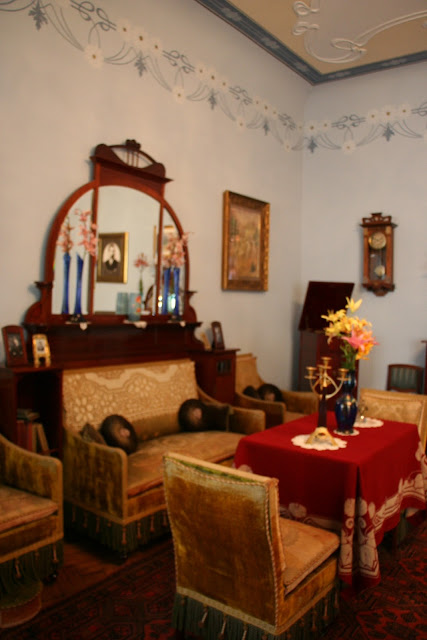 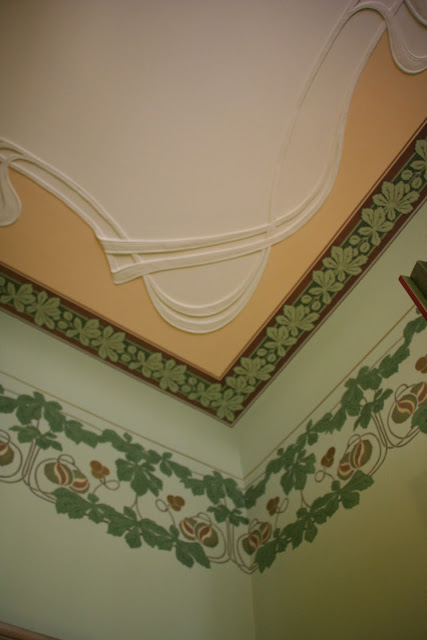 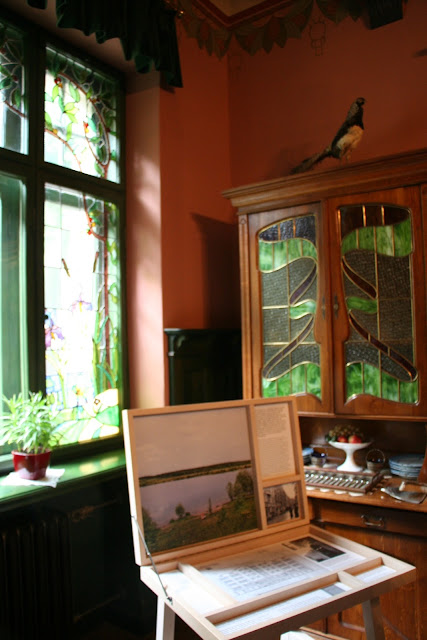 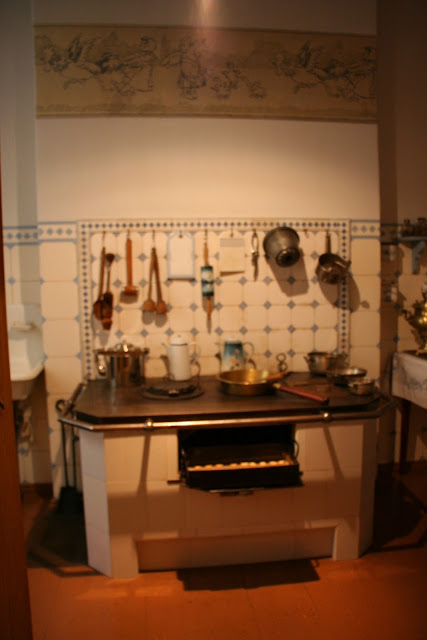 The kitchen with original stove and tiles, the cookies are in the opening of the oven.
When we got to the kitchen we were offered sugar cookies by a young woman in period maid's costume. Each house had a central kitchen with a tiny Maid's room next to it,  she also acted as security with her room near the back door. The occupants of the various apartments shared the maid, what a good idea. It was a wonderful museum.
Staggered off to lunch and reports coming through from Australia with rolling scores for the State of Origin Rugby League match, the decider! 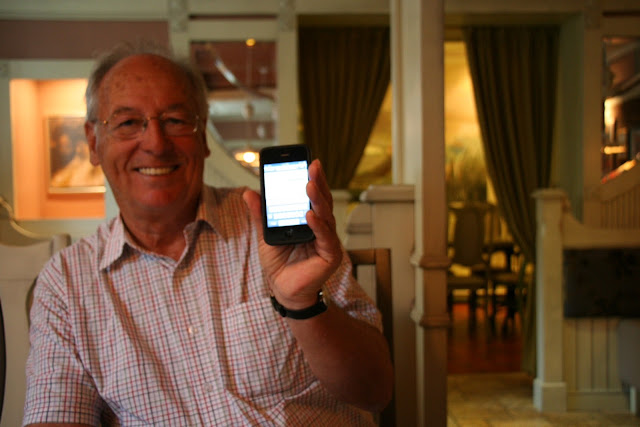 Geoff being updated while we were having our posh lunch in an Art Nouveau Restaurant, ah the ambience of a "bing" every few minutes but it was worth it. Queenslanderrrrrrr!!!!!!!!!! 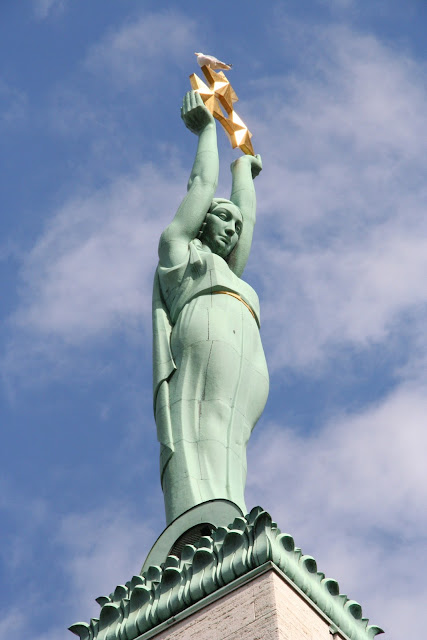 The Liberty Statue and seagull.
Back at the hotel, it's still bright outside but we are too tired to go out again today and its only 6.30, we've hit the wall.
Michael Rebecca and Edward are home again. Edward has continued to be the perfect baby by sleeping most of the flight and charming all who met him with his cheery waving. We see Kevin Rudd has cancelled the Carbon Tax, it was on the BBC news, so he and Tony Abbott are looking more and more alike!!! Distressing news of asylum boats sinking on the way to Australia. Kate and Jonathan are in Norway in freezing conditions sitting in their hotel looking up at a glacier on their way to Bergen. I am looking forward to seeing all the Brisbane mob soon, I miss them all. Thanks for messages anon.

Tiles in front of Art Nouveau Museum
Posted by Creina at 08:57