Today our first stop was the Estonian history museum. These Estonians are a hardy folk, surviving so many invasions and occupations. The museum was in a building built in 1410 and was a fantastic museum. Beware any Straddie museum people if you read this as Geoff has lots of new ideas!!! 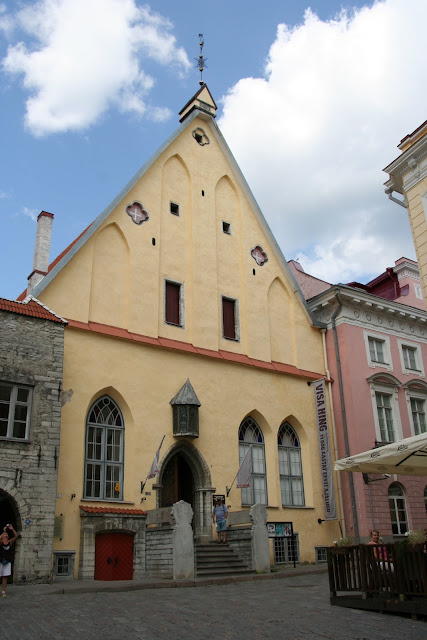 Here is Geoff on the steps with a proprietary air about him. The museum took up 3 levels, the main area on the history of Estonia and its people with a couple of videos as well that had English subtitles. 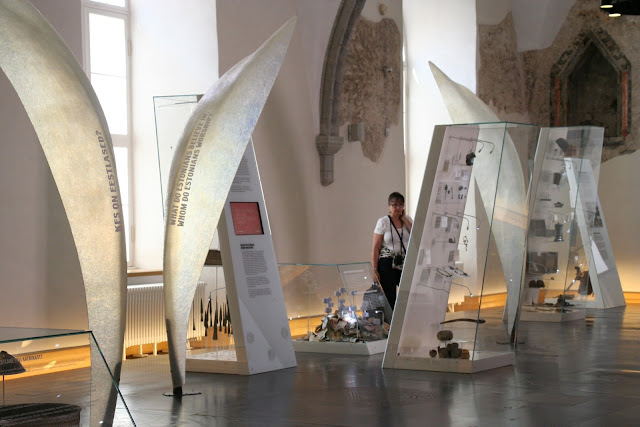 The cabinets contained artefacts as well as a short story about different subject and often an interactive screen. They were excellent and packed a lot into a small space. 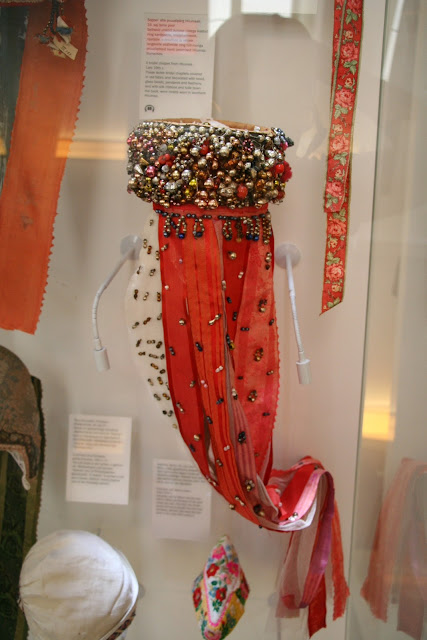 Here is a cabinet with bridal head dresses. 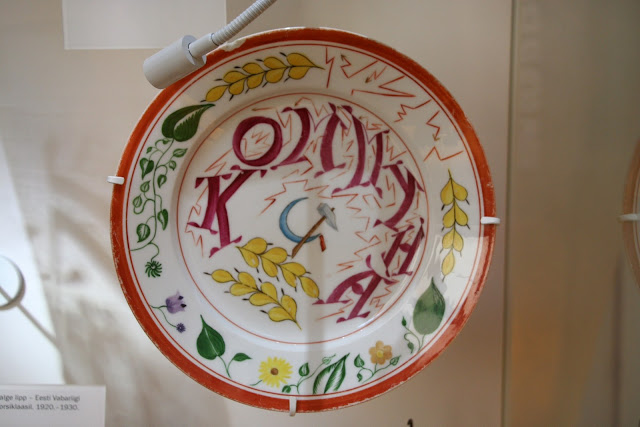 This one had pottery with hammer and sickle from the soviet era. There were sad artefacts from the soviet days of possessions of people who were sent to Siberia.
On the bottom level there was the fire place for a hypocaust still preserved. I thought this ingenious. 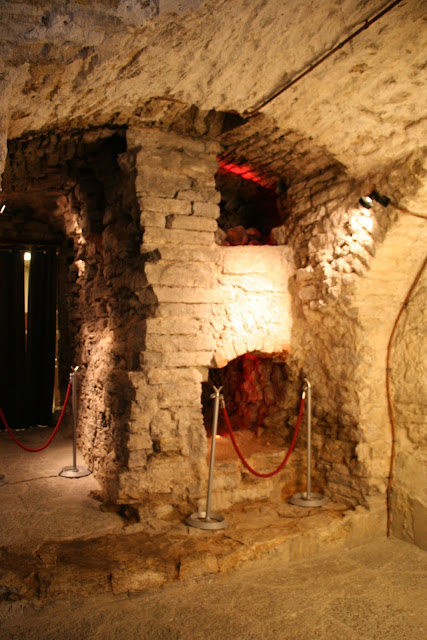 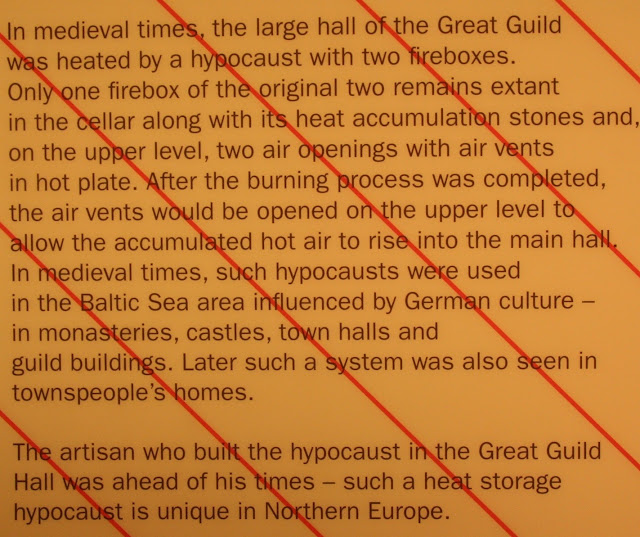 The top floor held and armoury which I passed through into an area which held a private collection of historical artefacts from around the world. One of them was a manuscript written by Mozart which gave me a thrill. 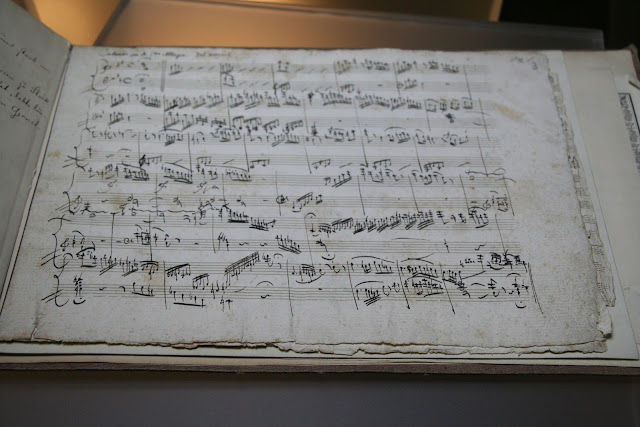 Best loo in town as well. Loved the ambience 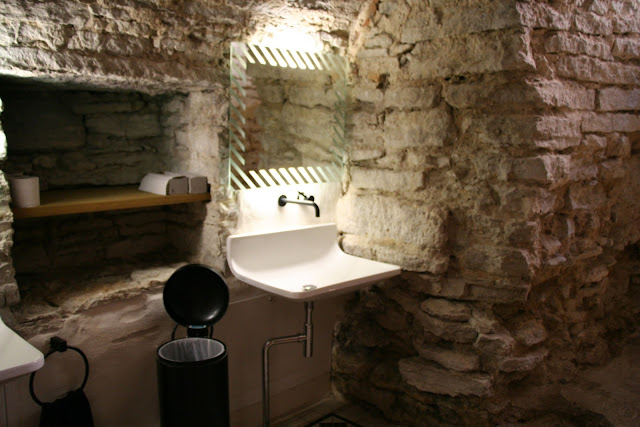 In the loo cubicle was a recorded man's voice, which was a little unnerving, that recited Estonian names with background sounds which I thought were flies at first but must have been bees. Otherwise Estonians have a wicked sense of humour. 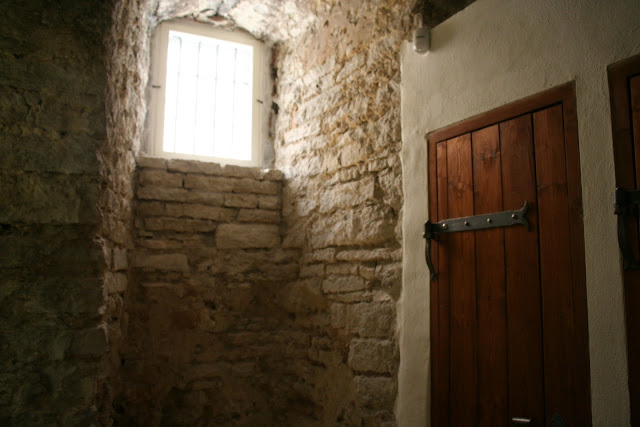 Worth two photos I thought after all Loos are important when there are scarce and expensive. We were museumed out after several hours of reading and viewing and now I can only remember a fraction, although I now have a great deal of respect for the Estonian people. They have had a rough history.
We had to stop for a delicious milkshake of course after that museum marathon. No drink is small in this country, we should have shared one. You should see my little round figure!!! Second thoughts.....no. Geoff has been following the first ashes test via my brother in England so every wicket that fell, in came a "bling" on the phone. Geoff then sent the score onto K&J, talk about a mob of cricket tragics!!!!!! Here is Geoff mid SMS, staring at his phone while Tallinn throbs around him. 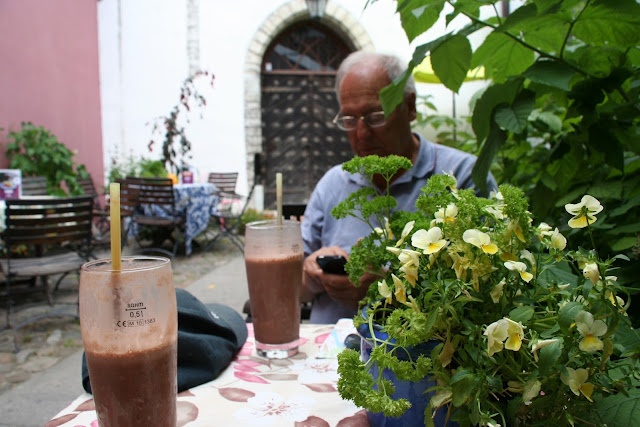 We walked trough a very old and unrestored part of the city hardly seeing another soul. I particularly liked this area as people lived here and there were no tourists. 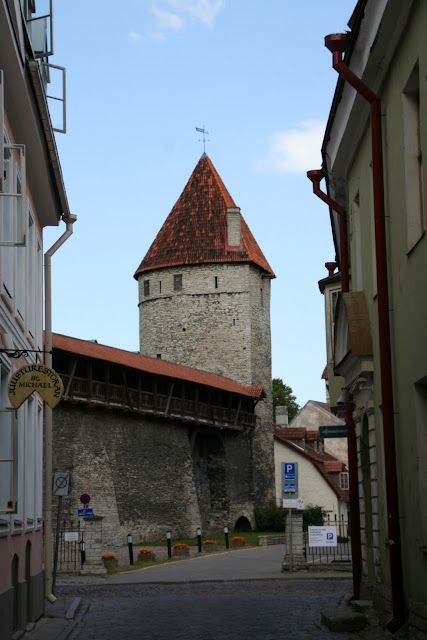 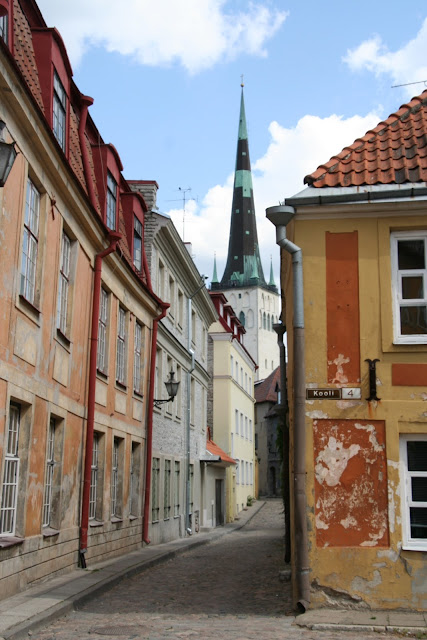 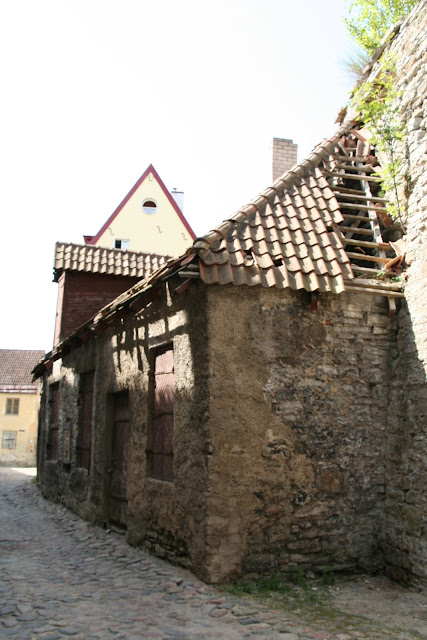 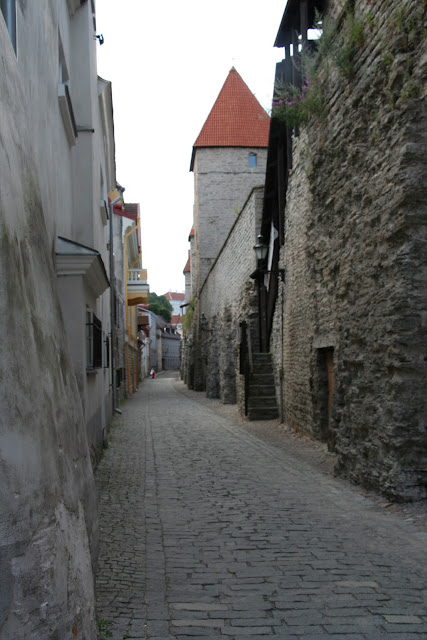 Again we needed sustenance, it must have been twenty minutes since we last drank or ate anything. We returned to our favourite spot. 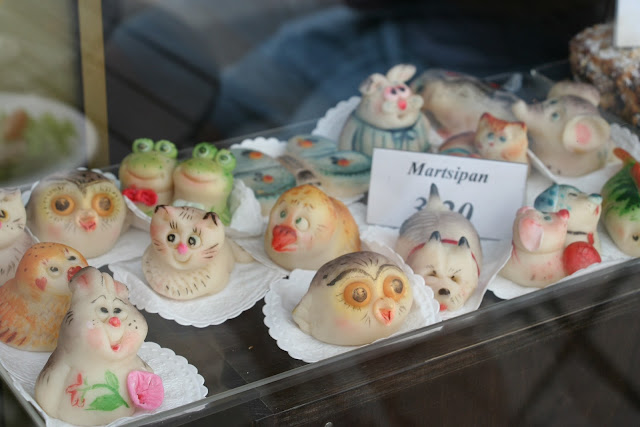 Everyone stopped at the window to view these marzipan animals. The coffee was also good. 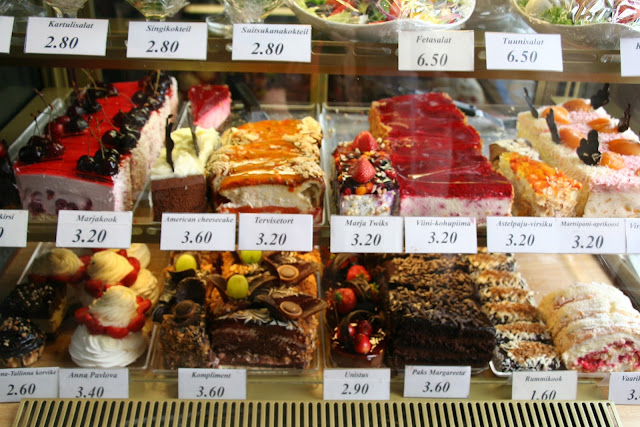 No we didn't eat any of the above. We chose a very sensible bun to share, see below. 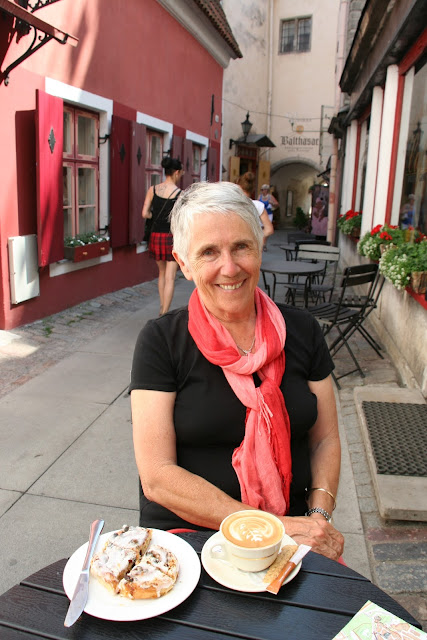 See, I really am on this trip, proof at last! You can't see me for that old woman hogging the foreground, she does look tired. Lovely linen scarf she's wearing, must be a local. 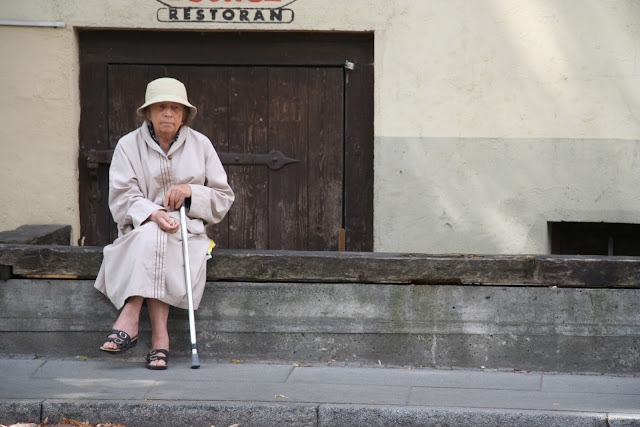 This woman caught my eye, typical of the people seen in Tallinn (she's probably from NYC). On the flip side are the dreaded "young people" without a care in the world. No tortured life like their parents and grandparents. This girl below had the highest shoes I've ever seen and she actually walked on the killer cobblestones. I did see her later carrying her shoes! 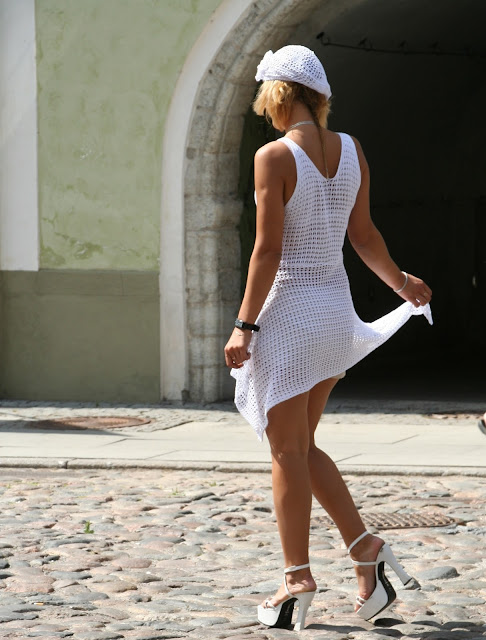 Geoff wouldn't  budge from the cafe as he was reading SMS like there was no tomorrow. So we had to order more drinks! The cricket was approaching the lunch break with one wicket and 20 runs to go for the Aussies to win. I went for walks and circled back every so often, on one walk I found Mad Murphy's Iri Pubi and Grill with a poster saying the ashes were being televised live, big mistake! 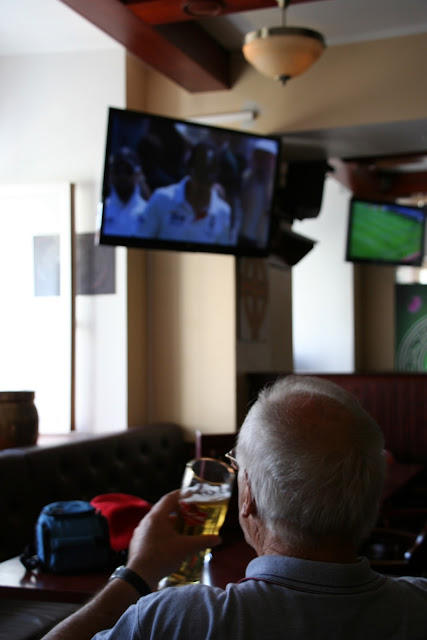 Tallinn with its 1100 year history is outside the window and what are we doing? Terry Moore even sent an SMS to make sure we were watching. I must admit I was caught up in it too and bit off my thumb nail and drank my cider so quickly that I had no trouble negotiating the cobblestones on the walk home. Shame to lose the match on a review, we was robbed! 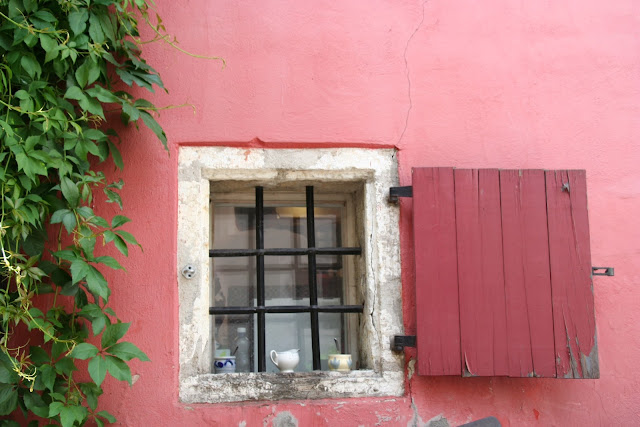 I have hundreds of photos of windows from Sweden and now have added more. Håkan, if you're reading this, my obsession has not ceased.
Posted by Creina at 08:53