View from our window this morning
The last blog was what we did yesterday. We totally exhausted ourselves so I didn't get to send it yesterday. We came back to the hotel and collapsed, we slept like logs and when we woke up we were too tired to go out for dinner, so went back to sleep.
This morning I wondered if I'd need another few hours in bed but managed to struggle out. The above phot is what I saw first thing so how could I stay in bed.
It was decided we should take it a bit easier today so caught a tourist bus along with a mob of old, fat boat people like us. We travelled out of the old town to the huge park which Perter the Great created for Catherine. It was a glorious, hot day, and a walk through the lush, green unkempt park was refreshing. 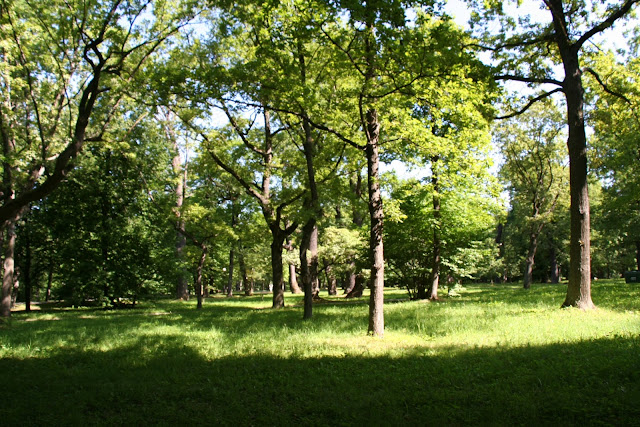 Catherine' palace was quite small after seeing those in St Petersburg, there was a lot of restoration going on so most of the building was shrouded in scaffolding. The formal gardens behind were lovely. 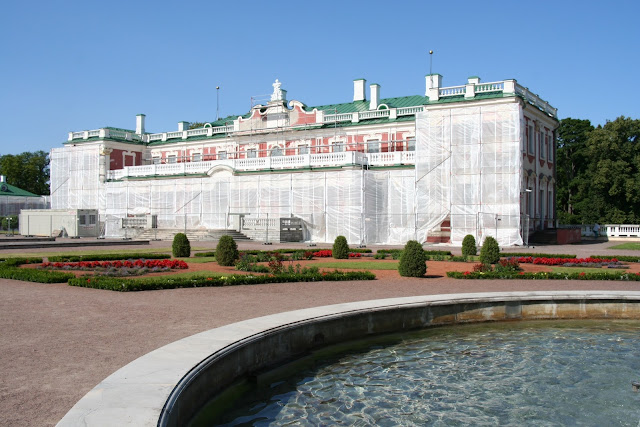 We were looking for Peter's house and found the spectacular modern art gallery Kumu. 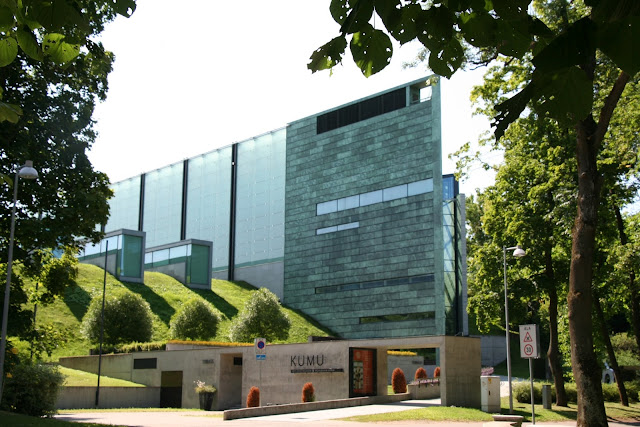 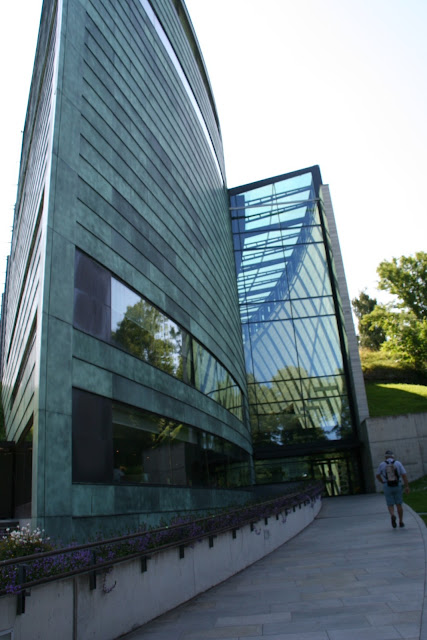 It contained Estonian art and we decided to spend a large part of the day here as it was such a beautiful place and we would avoid the Saturday tourist throng we thought. 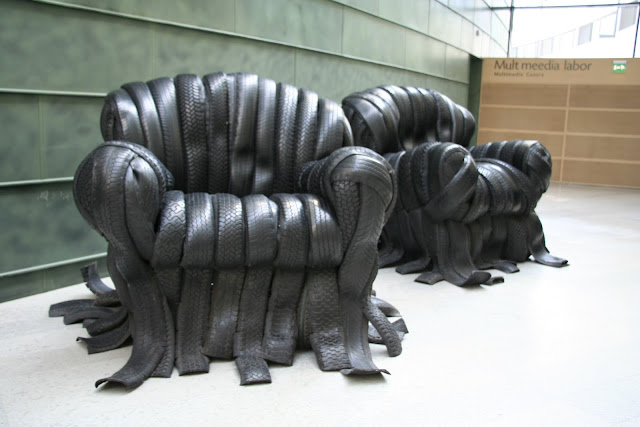 There was a display of painted cars but I preferred these larger than life retread chairs by Villu Jaanisoo
1963. 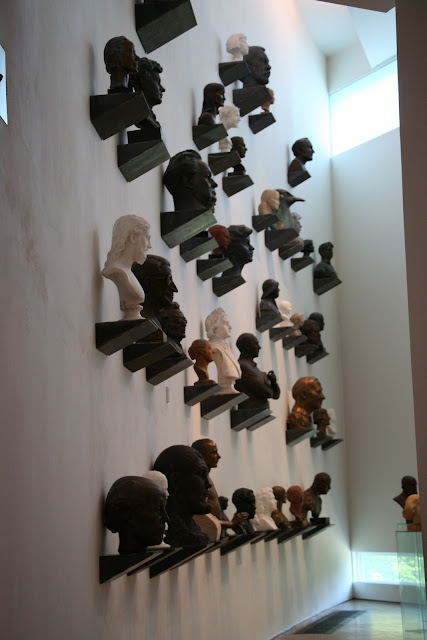 Another favourite room was this one by a single sculptor, sadly I can't recall his name. 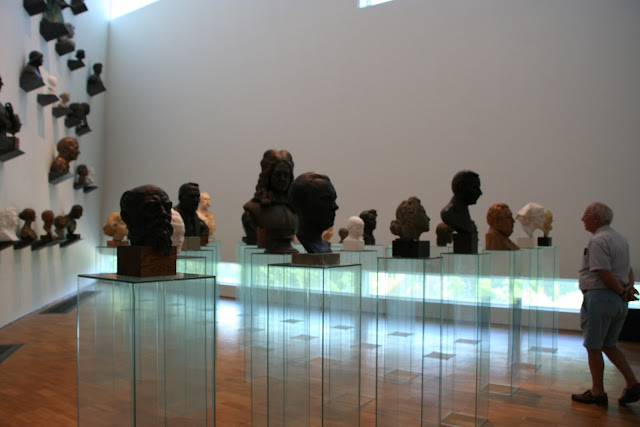 We both love the exhibition. 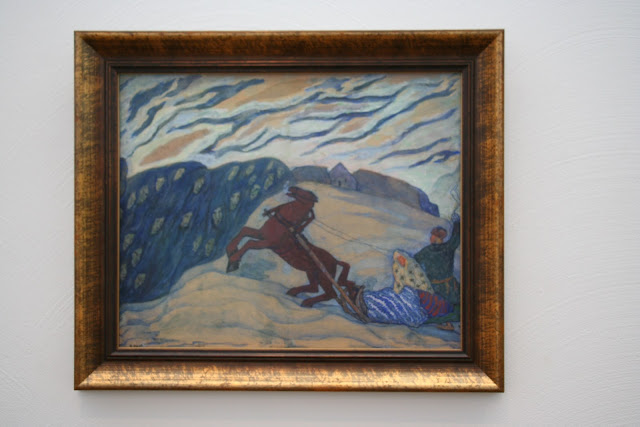 Kristjan Raud c.1938. I have seen similar Swedish paintings like this. Perhaps they influenced each other at this time. There were not a lot of paintings that appealed to me, there was a large influence of German Expressionism. I suppose there wasn't a lot going on during the Soviet era which may account for a lack of exposure to the world of painting.
There was a great photographic exhibition by Irving Penn a fashion and advertising photographer who died in 2009. He took some wonderful portraits of famous people of the day along with everyday people from wherever he was shooting fashion in the world at the time.
The most interesting exhibition for me was one we nearly walked by. It was modern approaches to philosophical questions and in the entrance was an Anthony Gormley sculpture I hadn't seen before. It was his figure lying down with the head encased in a terracotta house. It was a comment on how we don't see outside ourselves, (forgive my brief explanation Mr Gormley).
After a delicious carrot and ginger soup in the gallery cafe and some of Estonia's to die for dark bread. We sauntered back to the bus stop. I took a great (of course) photo of Estonians at the beach with the Cruise ships in the background but I don't know what happened to it.
After going around the bus circuit we walked up to Toompea Hill, had a drink in a pottery shop cafe. Geoff has discovered a refreshing milkshake, I must tell Sonya, when ordering it they talk him out of using milk as using cherry juice or plum juice with ice-cream is much more refreshing. He had a chocolate milkshake and it tasted like cherry ripe, yum. 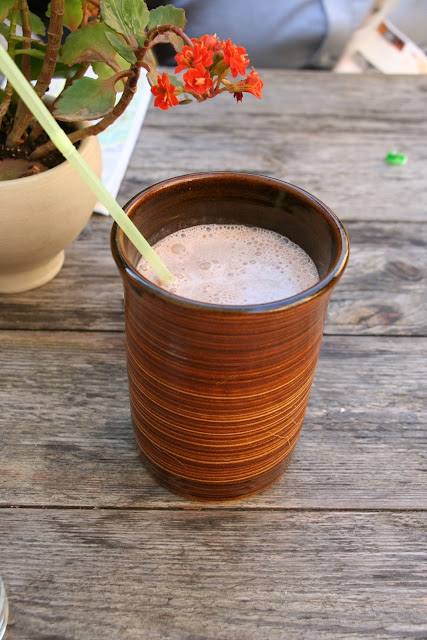 Served in a pottery cup. 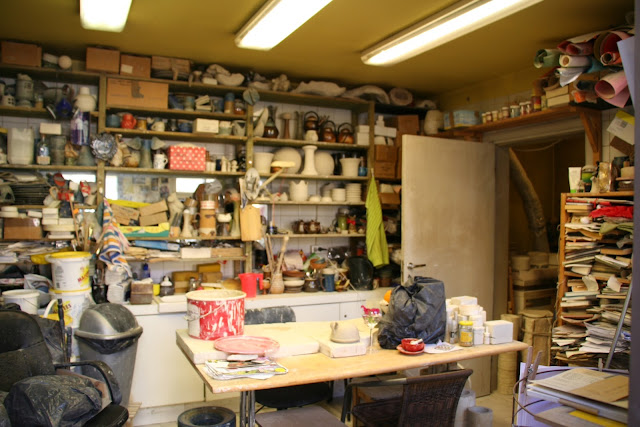 The pottery studio, hmmmm, we must all be untidy. 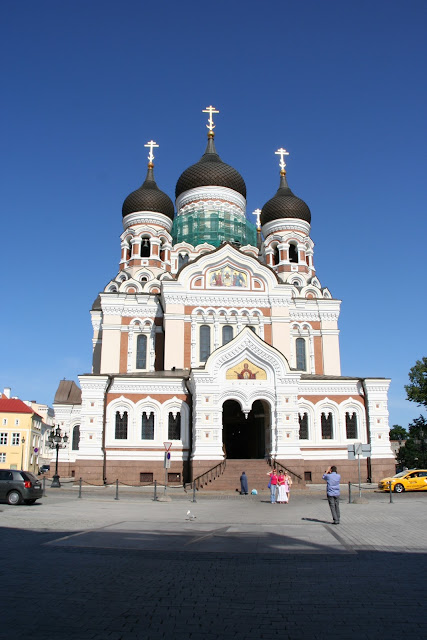 Next stop the Russian Orthodox Church, it was full of bling inside but could use cameras. 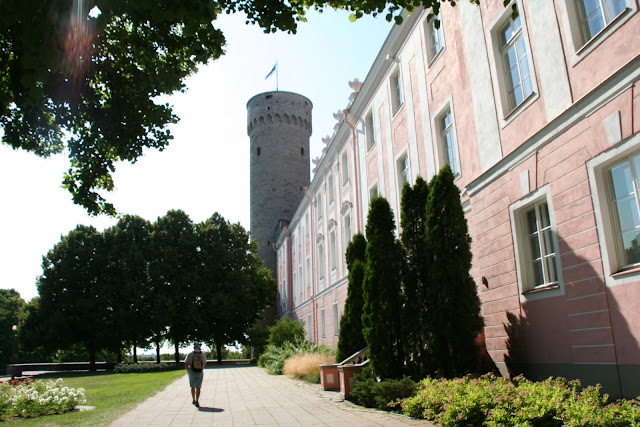 This is the side of the Estonian Parliament opposite the Russian church looking at the tallest tower, I can't remember the name at nearly midnight. 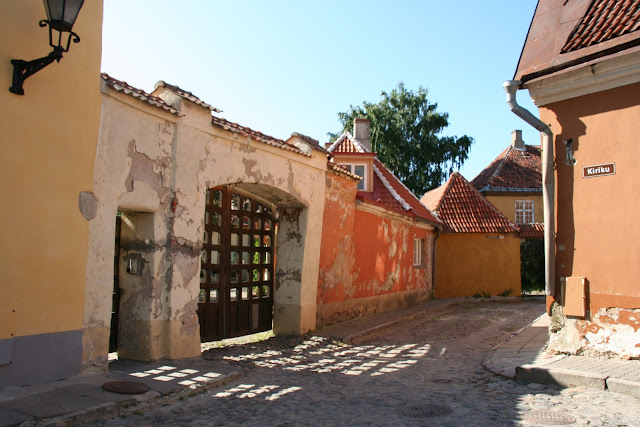 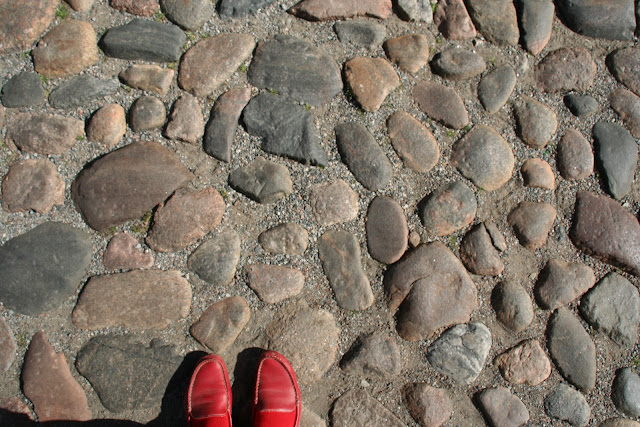 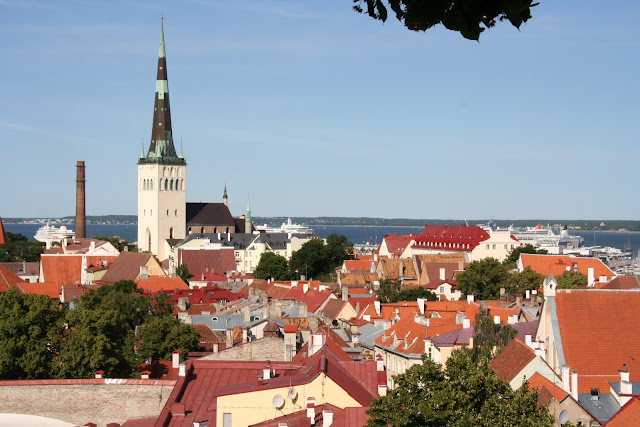 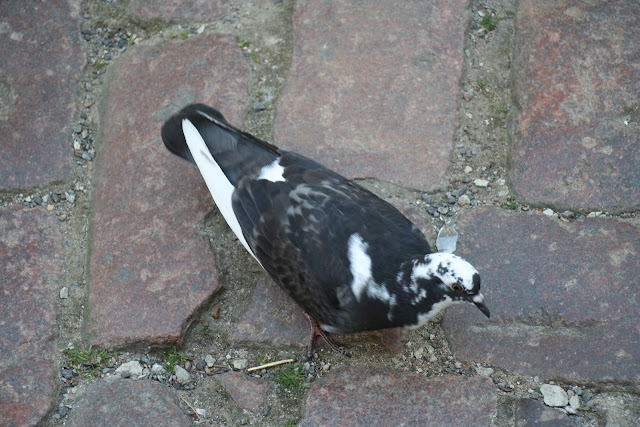 They have live versions of my Raku pigeons. 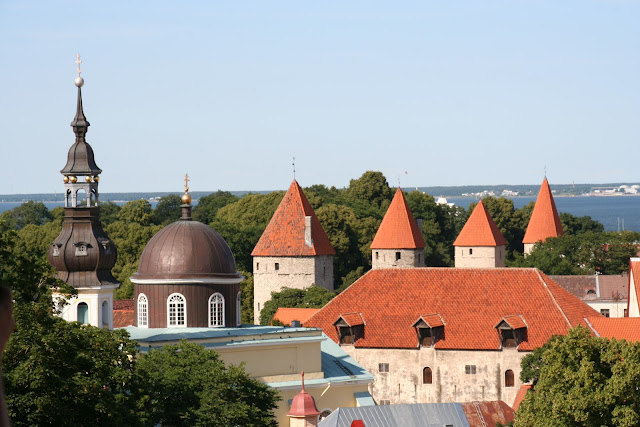 It's been a great day. We stayed awake tonight and had dinner in an old Estonian restaurant, roast pork, sauerkraut and potatoes. They serve beer in litre or half litre glasses, and it is not ice cold like Aust. Finding a loo is a never ending story especially if you have to have change ready! 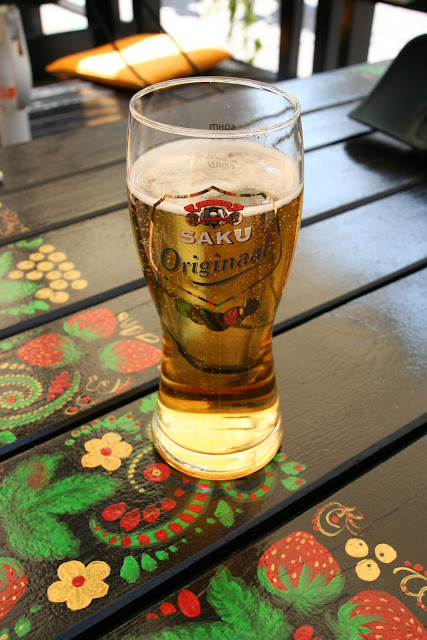 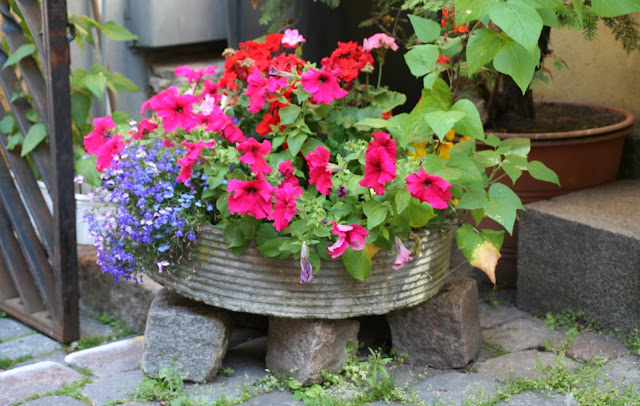