Busy week as usual.
Friday I met up with my English friend Susan and we went to Goma to see the "Dead Dingo" exhibition as Susan calls it by CIA Guo-Qiang titled "Falling Back to Earth". I could have titled it "Falling Flat" as I was very disappointed with it both in depth and in execution in some areas. It is being talked about non stop but that's is due to its being a commission and we, the tax payers, have paid for it and the gallery wants to talk it up I expect. We, the taxpayers, also have to pay to get in as well which would be fine if it was worth it. 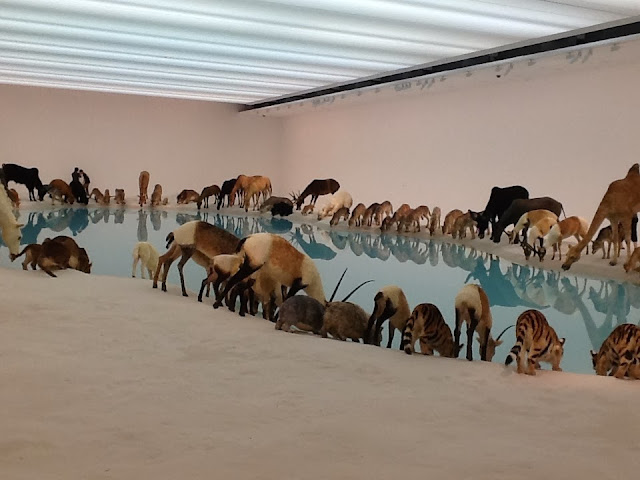 The first room we entered was the installation Heritage 2013, a selection of 99 animal replicas made from styrofoam and goat hide based on an image that came to the artist on a visit to North Stradbroke Island. The sand was also from Straddie. The size of the installation was impressive taking up the entire room, there was a hushed feel about the room with people whispering. Often the animals feet didn't touch the sand which spoiled the illusion and with each animal being made of the same painted white goat hair gave it a fake look. 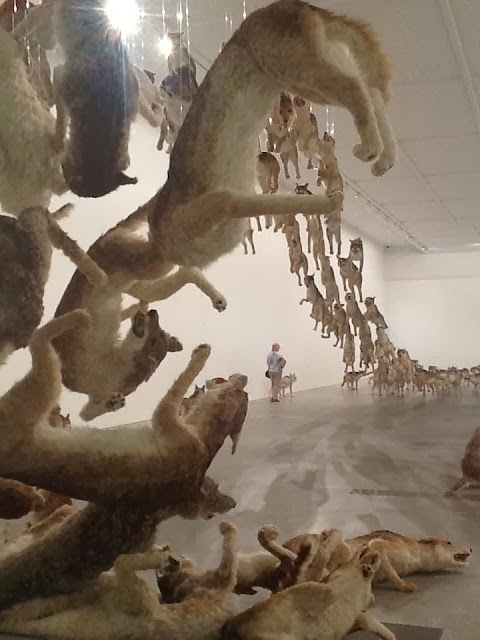 The meaning of the dead dingoes was all a bit too simple and there was no pausing to try and see what the artist was trying to say. 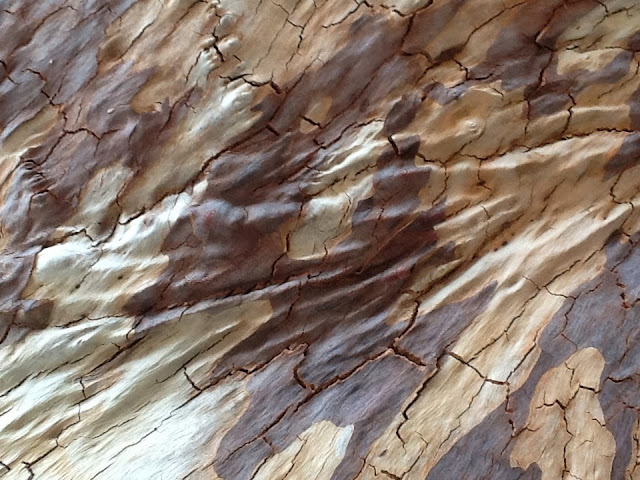 Large eucalyptus trees were also part of the exhibition and I felt the meaning was too obvious as well.
They were beautiful in themselves as you can see from the photo but the whole exhibition didn't engage me emotionally. I went with an open mind but it didn't measure up at all.
Saturday was a flat out day,a dear friend who is a beginner potter and I went up to Maleny in the pouring rain to Shannon Garson's open studio where I completely forgot to take photos for the blog!!! My friend had taken a workshop with Shannon at the Slow Clay Centre in Melbourne run by Jane Sawyer, www.slowclay.com last month and was impressed with the centre.
Shannon was her sweet self as usual and had great range of her work on display in her clean and tidy studio. I bought one of her small nest bowls. She throws all her work and hand decorates the porcelain. The shimpo wheel she has been working with for six months doesn't suit her throwing style she said as it is more for the Japanese method of throwing off the hump. 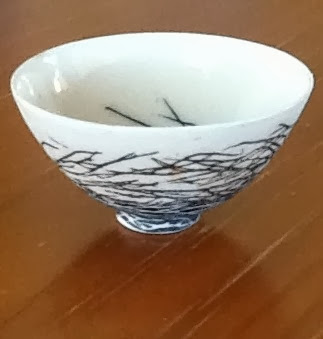 Not a good photo I'm sorry.
Lunch in Maleny and a browse in the shops before heading home. I had bought Kate a mozzarella cheese from Shannon's husband Trevor Hart who has the Cedar Street Cheeserie next door to Shannon's studio. He is one of two who makes handmade mozzarella in Australia and sells at the Powerhouse markets in Brisbane and Noosa markets. He can't keep up supplies for the demand. Geoff and I dropped off the cheese to K&J's and in return had a delicious freshly baked Lemon Myrtle cake for afternoon tea.
Off to the island and a rush to Point Lookout for the launch of a friend's CD, The Marma-dukes. The Straddie Singers opened the evening with several songs. The appearance of glasses of wine lubricated their voices.

The place filled up to overflowing very quickly before the main acts, lots of people I hadn't seen in ages including a best friend from high school who was staying with a friend at the point, so that was great.
Today I was late into the shed, very tired. Too windy to decorate so I did some drawing and made stencils cut. 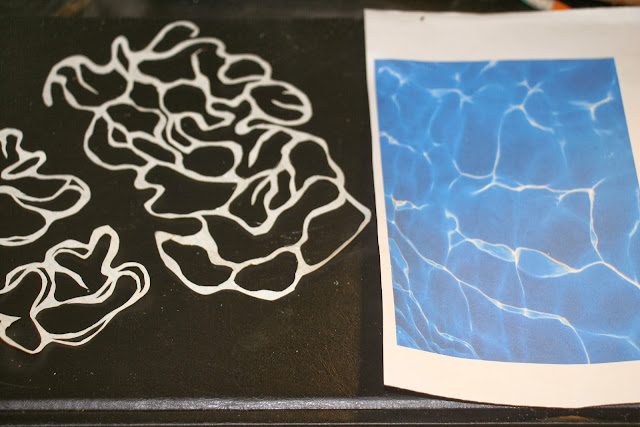 These are for the bowls and cups. One of several layers. 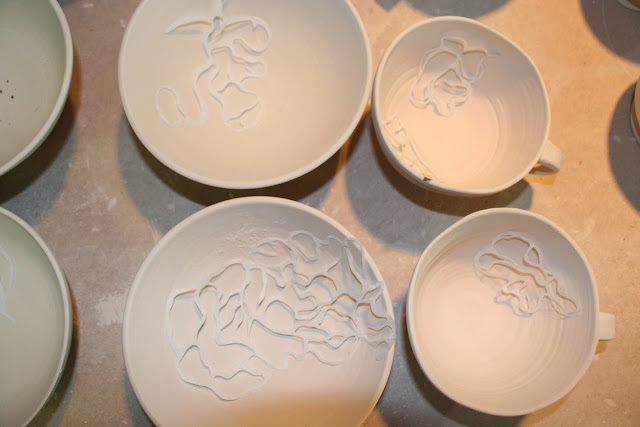 Plates have also been started with a drawing, layers are also being added 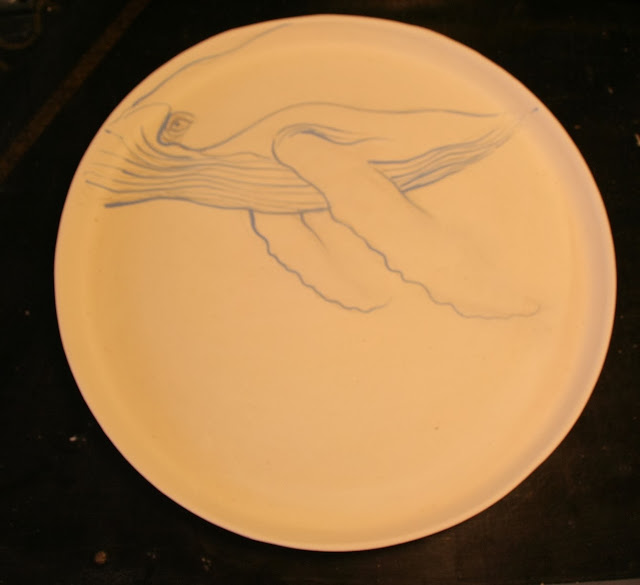 Masking below to leave lighter areas. I hope the wind dies down tomorrow and I can do some decorating. 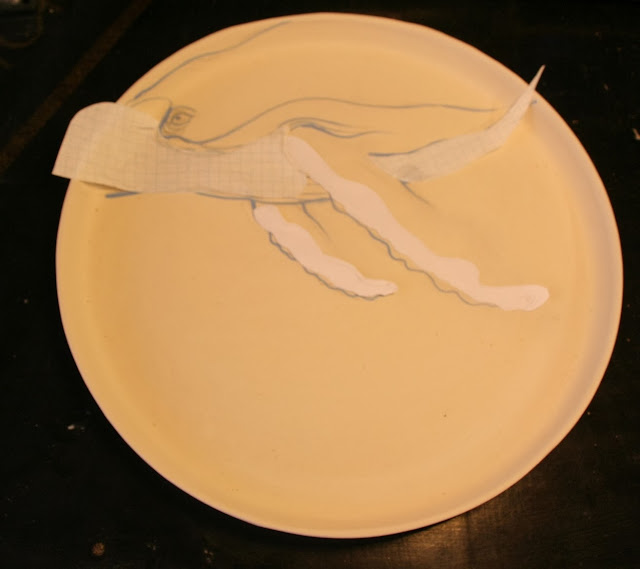